On the 30th of September 1676 the Delft courts appointed Anthoni van Leeuwenhoek as curator to the insolvent estate of Catharina Bolnes, the widow of Johannes Vermeer. So great is the power of those two names that generations of art historians have interpreted the document as a sign of profound bonding between art and science. Schwartz, in the footsteps of Michael Montias, reveals the disenchanting truth.

The Prinsenhof Museum in Delft has a very nice app called WikiDelft, which keeps you up to date (in Dutch) on the history and culture of the city. Consulting it today, for research on the book on Johannes Vermeer I am writing, I was startled to read as the tip of the day: “30 September. 1676. Antoni van Leeuwenhoek of Delft, the inventor of the microscope, becomes curator of the (insolvent) estate of Johannes Vermeer.” Following the links on the site, I arrived at an image of the actual document.

In a translation adapted from that of Michael Montias, in the legendary Vermeer and his milieu: a web of social history, Princeton (Princeton University Press) 1989:

The Lords Aldermen of the town of Delft hereby appoint Anthonij van Leeuwenhouck as curator of the estate and of the assets of Catharina Bolnes, widow of the late Johannes Vermeer, during his lifetime master painter, who had requested and obtained letters of cession, which he retained etc. Passed on 30 September 1676.

The document was first published in 1881 by F.D.O. Obreen in vol. 4 (p. 295) of his invaluable multi-volume collection Archief voor Nederlandsche Kunstgeschiedenis. This link between the two most famous inhabitants of Delft, born in the same last week of October 1632, men who lived a few blocks from each other all their lives, delivers a historic sensation of the first order. Few biographies of either men omit this evidence of contact between them. How could they not have been lifelong friends and fellow workers in the vineyard of vision? That van Leeuwenhoek was a prodigiously gifted maker of lenses with a magnification of more than 200x, and that Vermeer was thought to have pioneered the use of lenses as instruments for the painter, elevated the nature of their relationship from an anecdotal curiosity to a key turning point in the history of art and science. The provisional climax of this view of things was reached in March 2015, with the publication of a book by the “historian, philosopher, storyteller” (TED, with a very nice talk on another subject) Laura J. Snyder. The title is Eye of the beholder: Johannes Vermeer, Antoni van Leeuwenhoek, and the reinvention of seeing, New York (W.W. Norton & Company) 2015. I have not read the book, but I feel justified in criticizing the title. Well, sir, I consider it over-the-top hyperbole and sadly misleading to boot.

Now for the debunking. The document of 30 September 1676 is the first known mention of Vermeer and van Leeuwenhoek together. It is number 370 in Michael Montias’s list of Vermeer documents. It dates from nearly a year after the death of the painter in December 1675. For that matter, it was only a year before the death of the painter that van Leeuwenhoek made the first observations that indeed contributed to the reinvention of seeing. By that time Vermeer was in such bad shape that he had long been incapable of painting.

Of course Laura Snyder knows this, and if in the text of her book she weighs the evidence prudently, she will have to take her distance from the suggestion in her title that Vermeer and van Leeuwenhoek were somehow jointly involved in a great revolution in the history of sight. Whether Vermeer deserves recognition on this score separately from the lensmaker is a matter of debate. It has become an ineradicable idée chique that the artist used an optical device called a camera obscura for his interiors and his View of Delft and that this qualifies him as an artistic innovator.
If he was, no one knew about it at the time or for two-and-a-half centuries after his death. For my part, I see nothing in Vermeer’s technique that was not being practiced by dozens of forebears and contemporaries. Nor do I think that he used a camera obscura for his compositions at all. Why in the world would he want to sit inside a dark box on the back wall of which he could see dim, upside-down and right-left inverted projections of a scene out front if he could paint that scene right-side up, in full light, in a way for which he had been trained intensively over a period of years from childhood on? In order to prove that he did, far more compelling evidence would have to be brought to bear than has ever been produced. One would also like to know why such fascinating behaviour on his part was never noticed by anyone else.

The small blobs that Vermeer sometimes employs, which advocates of the camera obscura theory call halation globules caused by a lens, can be found in the work of other artists who have not attracted that kind of attention. Aelbert Cuyp, for example, used similar dabs to give relief to grass in meadows outside Dordrecht, miles from the nearest camera obscura. (The portable models that were used by artists like Canaletto were not being made until the eighteenth century.) Notice too that the dots in Vermeer follow the forms of the woven tapestry being depicted rather than catching the arbitrary bulges in its surface, as one would expect if they were generated by an optical instrument rather than an artist’s tactics.

The romanticization of the ties between Anthoni van Leeuwenhoek and Johannes Vermeer does injustice to the historical record in a further cruel way. The curator of an estate has permissible options that can benefit the heirs to a bankrupt estate. Van Leeuwenhoek did not employ them. Montias: “Van Leeuwenhoek does not seem to have been partial to Vermeer’s widow in his curatorship…” He came up consistently for the rights of the creditors rather than Vermeer’s widow Catharina Bolnes and her mother, Maria Thins. Montias holds him responsible for “the allegation … that Maria Thins and her daughter had conspired to conceal some of Catharina’s assets,” which would have landed them in jail had they not been able to prove it was a lie. In one action in which he was entirely free to show sympathy for the heirs, he behaved oppositely, by charging Maria Thins sixty guilders for his services as curator. Are we to believe that as she paid up she thought of Anthoni van Leeuwenhoek as a good friend and collaborator of her deceased son-in-law?

The 30th of September 1676 is indeed a day to remember. Not for proving that Anthoni van Leeuwenhoek was a partner of Johannes Vermeer in the reinvention of seeing, but for regretting that he added needlessly to the misery of Vermeer’s heirs, besmirching their reputation and with it the artist’s memory.

The book on Vermeer I am writing is a commission from the Antwerp publisher Ludion. The book has a highly determining concept. It belongs to a series on great artists on the basis of details from their paintings. Jan van Eyck, Jheronimus Bosch, Pieter Bruegel and Michelangelo da Caravaggio have preceded my Vermeer in detail. Because time is short, I had to choose the 140 details, divided into ten themes, before doing anything else. The shortness of time is dictated by the need that the book be out on time for an exhibition opening in the Louvre on 20 February 2017: Vermeer and the masters of genre painting: rivalry and inspiration. In addition to commentary on the 140 details I am also writing texts on each of Vermeer’s thirty-seven paintings. The number includes two paintings whose authorship is often doubted but in which I believe (St. Praxedis, Young woman at the spinet) and two that are mostly accepted, in which I do not believe (Women with a red hat; Woman with a flute).

I was therefore sensitized for a visit to the new exhibition at the Mauritshuis, At home in Holland: Vermeer and his contemporaries from the British Royal Collection. (In the UK, where it previously was shown at The Queen’s Gallery in London and Edinburgh, the exhibition was called Masters of the everyday: Dutch artists in the age of Vermeer.)

Johannes Vermeer, Lady at the virginals with a gentleman, early 1660s
Oil on canvas, 73x 65 cm
The Royal Collection

Her Majesty owns only one painting by Vermeer, but it is the undisputed star of the show, which is highly recommended. 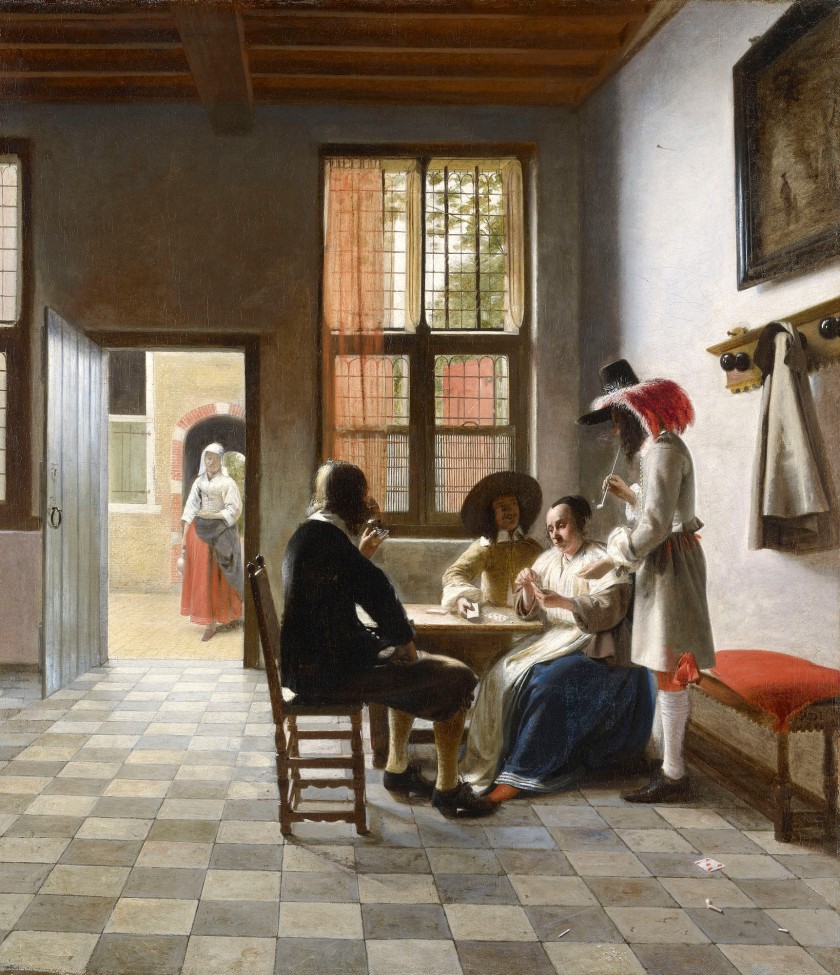 One of the other main attractions is an interior-view-through painting by Pieter de Hooch.

It is an intriguing complement and contrast to the kinds of interiors painted by Vermeer, like Young woman drinking wine in the company of two men in Braunschweig. With the same basic ingredients, de Hooch creates a totally different mood. The space is far more open and transparent. The windows are parallel to the picture plane, so that we can look through them at what’s outside, along with a view into the street and the neighboring house. The company in the evenly lit interior is engaged in a perfectly understandable game of cards, albeit with a slight hint of hanky-panky as the woman touches with her red slipper the shoe of the man with a glass. They are further away from us; the distance allows better understanding. The perspective of the tile floor is directed to a single vanishing point within the composition rather than two outside the picture, as Vermeer habitually does, with transversely laid tiles. The picture-in-the-picture is seen in foreshortening on the right. Vermeer always hangs his against the back wall, straight on. It is as if de Hooch were seated at a spot ninety degrees from where Vermeer would choose to sit.

Choose is the operative word. Comparing de Hooch’s view with Vermeer’s makes us aware of all the choices that an artist in their position had to make, and of the consequences of those choices.

Responses to Gary Schwartz@xs4all.nl are always appreciated and will be answered.

Your donations help defray the costs of the Schwartzlist and encourage Gary Schwartz to write more columns.